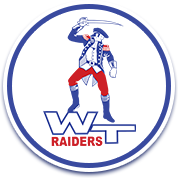 Unbeaten and unscored upon Tinora will take its perfect season to 2-2 Wayne Trace this week in the next to last regular season game before playoff action starts.
“I think with all the circumstances and all that has gone on, we’re very pleased with where we’re at and where this team is heading,” said 23-year Tinora headman Kenny Krouse.
The Rams have posted 119 points while not allowing a single point thus far in triumphs over Edgerton, Hicksville and Antwerp. Tinora was idle week one.
“I think defensively we’ve bent the first few weeks but have been able to keep teams out of the end zone,” remarked Krouse. “We’re playing a lot of kids and I think we’re getting better. We’ve given up some big plays that are concerning.”
Wayne Trace mentor Mike Speice knows it will be challenging moving the ball on Tinora defensive coordinator Mike Heilshorn’s defense.

SHERWOOD – Defending GMC champion brought the hammer in Friday’s season opener against visiting Wayne Trace.
An unstoppable offense was coupled with a hard-hitting defense in a 47-0 romp that featured the Apaches leading 41-0 at halftime.
“We played well,” said Fairview mentor Doug Rakes.
Before the easy triumph, Rakes was very concerned about the Raiders.
“I was nervous, my stomach was in knots all day.”

HAVILAND — After a subpar season in 2019, the Wayne Trace Raiders and head coach Mike Speice will be leaning heavily on an experience-filled roster to return the Raiders to their high-flying ways.

Last season, the Raiders struggled to string wins together, gaining back-to-back wins only one time in victories against Ayersville and Jefferson Township as they finished with a 4-6 overall record, while finishing with a 2-4 mark in the seven-team Green Meadows Conference (GMC).

Now, as the Raiders head into the 2020 season, they’ll look to return to the postseason after a two-year absence, on the wings of its patented high-flying offense and stingy defense.

The Raiders’ offense is known for putting up lots of yards and a ton of points with ease thanks to its spread offense.

2019 saw those numbers continue with the Raiders averaging more than 25 points per game with more than 2,000 yards of offense compiled.

Back to improve on those numbers and add to his impressive career totals is four-year letterwinner and starting quarterback Trevor Speice (sr, 6-0, 175).

For his career, Speice has thrown for 6,315 yards, while nearing the century mark in career touchdown passes as he enters the 2020 year with 75 TDs.

Specie also has proven to be able to hurt opposing defenses with his legs.

For his career, Speice has 1,171 rushing yards to go along with 13 rushing scores.

Speice, however, will be missing a few of his top targets from a year ago.

Graduating from last year’s squad was top target Alex Reinhart, who caught 42 passes last year for 808 yards for a whopping 19.2 yard per catch average. Reinhart also turned 13 of his catches into touchdowns in 2019.

Also gone from the 2019 squad will be two-year letterwinners, Nate Gerber and Nate Shepherd.

But the Raiders’ wideout cupboard is far from bare.

Speice will have an experienced crew of wide receivers returning to stretch opposing defenses thin.

Manz is the Raiders’ top returning pass catcher after hauling in 29 receptions for 504 yards with four trips to paydirt a year ago.

Several of Speice’s backfield mates were also lost to graduation.

Running back Riley Stoller (5-10, 180) got his feet wet a year ago, earning his first varsity letter and in 2020 he’ll have to jump into the deep water to fill the void left by graduated running backs Nate Showalter, Kameron Bevis and Reed Zartman.

Providing passing protection for Speice and his receiving arsenal is an experienced crew of men up front.

Leading the blocking brigade will be senior Carter Baksa (6-1, 220), who will be joined by a group of experienced juniors.

“We really have a good number of returning lettermen,” explained coach Speice about the strengths of his team heading into the season. “We have also shown a good work ethic and a good team chemistry. Our kids are willing to work hard.”

The Raiders will be leaning on familiar faces when opponents have the ball in 2020.

Trevor Speice will continue to put his knowledge of offense to good use by being one of the Raiders’ top defenders.

Last year, the Raiders moved Speice around defensively and he flourished as the team’s top tackler.

From the defensive backfield and linebacker level, Speice led the team with 104 total tackles and earned all-GMC honors on offense and defense for his efforts.

Joining Speice on the defense will be a group of battle-tested defensive backs.

Up front, Parrish also returns after starting at defensive end in the Raiders’ 4-3 defensive scheme a year ago.

Joining Parrish in the trenches will be Baksa, Whitman, Sinn and Stouffer.

“We will have to lean on our upperclassmen to lead us,” explained the Raiders coach, who is entering his fifth year at the helm of the program and 18th season on the sidelines overall. “We’ll have to do that until our inexperienced players gain some game experience.”

Trevor Speice will punt and kick for the Raiders. Parrish is slated to do the long snapping, while Sutton will hold.

In the return game, Manz and Sutton will line up deep to return punt punts, while Slade and Cox are the kick returners.

According to Speice, the Raiders must improve week in and week out if they are to be ready to run with the league’s best and bring home a GMC championship.

“Fairview has a tremendous amount of starters returning and will be the conference favorite,” said Speice. “We look to be competitive each week and improve every Friday night. Each week in the GMC there will be great games and if you are not prepared, you will get beat.”